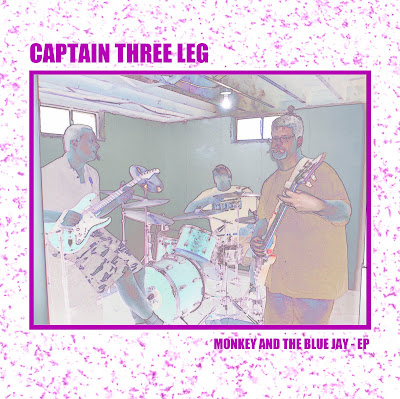 If you’ve followed Captain 3 Leg for a while you know that they’ve generally done a gore-noise-grind kind of thing, but that they’ve also never shied away from following their muse when it’s led them to prog, ambient electronics, and instrumental riff-rock. And you also know that head honcho Andy Koettel announced that the 100-band Small Doses compilation would be the final release of the Mortville label but that he is by no means quitting music and plans to continue putting out lots of stuff in download form. The low overhead of going digital can be really creatively freeing, and I think that jives well with Andy’s inclinations, given this EP recorded by Captain Three Leg a year and a half ago and just released last week on the Captain 3 Leg bandcamp site: three songs plus an alternate take of bluesy-funky classic-rock-inspired party rock’n’roll with some babbly lyrics that almost seem to find an intersection between Sockeye and ZZ Top. For further insights check out the post on the Mortville site.

When the going gets weird, the weird turn pro. I've been weird all my life. It's my time to shine.

Received this tape as a surprise extra when I ordered up the newestbelltonesuicide album, "Valley To Valley", on CD. M. Barret, betterkno...… Continue reading